Considering the volume of lies and vitriol that Trump spews all over the room every time he takes the podium, displays like we saw earlier this week should be the rule rather than the exception.

Let’s always recall and reflect on the moment when CBS reporter Weijia Jiang and CNN reporter Kaitlan Collins cornered Trump and pressed him about his lies and racism in a devastating one-two combination punch that sent him reeling away from his own press conference in a display of public cowardice that many of us have never seen before.  That is unless you count the time Trump bent the knee to Vladimir Putin in front of the whole world in Helsinki and proclaimed American Intelligence to be less reliable than the word of the treacherous murderous dictator. 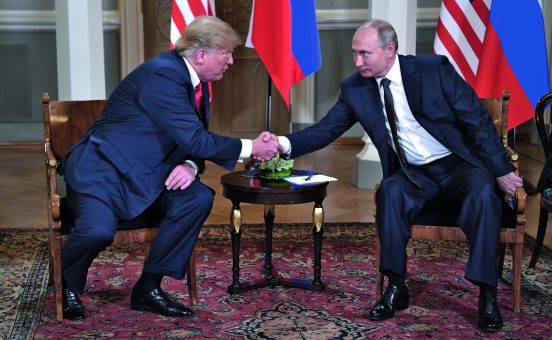 In any event, if the rest of the White House Press Corp would follow Jiang and Collins’ lead maybe they can start pressing Trump on these five key questions he never answered and so they just stopped asking.

1- “Why did you LIFT THE SANCTIONS PRESIDENT OBAMA IMPOSED ON RUSSIA?”  Since Trump has decided to play the Michael Flynn card in an effort to distract the nation from his disasterous response to the global pandemic and economic collapse, this is not only fair game, it is timely again.  After all, it was the sanctions on Russia that were the subject of Michael Flynn’s traitorous conversations with Russian oligarchs and his admitted lies to the FBI.  It is time to ask what Americans have to show for his largess toward Putin and his minions.  But this time, press for answers until he gives them up or takes that walk of shame back to the safety of the Oval Office where Jiang and Collins can’t follow him.

2- “I don’t know what OBAMAGATE IS, SO PLEASE EXPLAIN WHAT IT IS.”  It would be best to cut off his favorite rhetorical security blanket before he grabs it this time around.  The “you know what it is” response is an out the press has been granting him for almost five years now.  Enough.  It is time for “No, I don’t know, but evidently you do.  So why don’t you announce it right here and now so that everybody will know.”  That may be a bit saucy for most folks who make it all the way to the top of the printed press food chain but anything like that will suffice.

3- “Mr. President, if your Justice Department succeeds at getting Obamacare struck down in federal court, how will Americans with pre-existing conditions obtain affordable health insurance coverage?”  This one is a mouthful and it is a virtual certainty that Trump will try to cut off the question and do that interruption-pivot-insult maneuver.  He always does if his nose catches the scent of the trap being laid for him. After all, we know Trump does not have actual thoughts, but he does have the reflexes of a deer that senses danger.  And this one is very very dangerous for him.  He has NO answer that can sustain even the simplest of follow up questions.  He has NO plan in place to cover these people so he can’t even toss the ball to someone in his administration like a hot potato.  He’ll be stuck.

4- “Mr. President, was your praising President Xi Jinping about China’s response to the COVID-19 pandemic and your gift of 17 TONS of our PPE related to the 18 patents China has granted to Ivanka since this January?”  My money is on NPR’s Yamiche Alcindor to get all of this out before Trump can direct her to go ask Jesse Jackson for an answer.

It is a lot to handle in one shot but a reporter’s skills should be tight by the time they get assigned to cover that room.  Of course this question is an absolute kill shot.  Trump’s head will explode, sending orange spray-tan and weird blonde doll hair all over the front two rows.  But that bell will be rung and nothing he says or his Fox News propaganda network can do will unring it.  The target audience is not the Trump acolytes tuning in to that presser.  The target is the unreliable Biden voter out there who may believe the media hype about Trump being some kind of political ninja warrior.  When he melts down in public from this question, Democrats should smell blood and stop being so bed-wetty.

5- “Mr. President, you insisted that you would turn over your tax returns four years ago.  Now you have lawyers arguing aggressively before the Supreme Court to keep them hidden.  Why are you so determined to keep your tax returns secret?”  This is the White House Press Corps opportunity to atone for its original sin.  It let Trump off the hook for all of his lies about his tax returns.  When they got off it in 2016, the public followed soon after.  And since the litigation is live before the SCOTUS right now, this question is both timely and fair game.  I am nominating Jonathan Lemire to lead this particular charge.  This guy seems to have a knack for getting Trump to say things that he spends months attempting to walk back.  And since America will be deciding in only five months whether to dump this bozo or to make him America’s first Almighty Executive, time is due.

I recognize that big shot reporters from CBS, CNN, NPR and the Associated Press are not in the practice of taking advice from unknown political bloggers.  But I am more in touch with everyday people who vote because I AM everyday people who vote.  These are the questions that the people want to hear asked- and exactly the ones that Trump fears.  So step up, 4th Estate: your nation is depending on you now.