After Hurricanes Harvey and Irma, we are once again being treated to savory nuggets from religious “social conservatives” claiming that America’s moral decline continues its downward trajectorybased on various anecdotes ostensibly about “immoral” conduct primarily engaged in by minorities, and the concomitant wrath of God pummeling down on the country. Spare me.

These bloviating voices are mostly those of leading “Christian” conservatives. But here’s an open secret: modern day “Christian” conservatives, in effect a term that can be used to denote a proxy for Republican voters, have always been Biblical frauds.
Modern day “Christian” conservatives have been standing against societal progress for the full inclusion of minorities in America’s social, economic, and political life for decades. Starting in the 1950’s, they have been expressly against laws “morally” related to voting, integration, miscegenation, fair housing, employment, gender- and sexual-parity, among others. They went so far years ago to have President Bill Clinton begrudgingly sign the Religious Freedom Restoration Act.

Combined with purported First Amendment freedom of speech and of religion claims, the RFRA statutory “right” has created chaos for courts, lawyers, and those impacted negatively by “Christian” conservatives, clearly a “morally” based special interest group.  More germane, what religious leader using the Bible as a basis for either moral or spiritual authority can say with a straight face that Jesus would champion significant tax cuts for the wealthiest taxpayers? It’s blasphemous to countenance such a harrowing thought coming from Jesus.

What religious leader using the Bible as a basis for either moral or spiritual authority can say with a straight face that Jesus would support a decision to deport upwards of one million individuals to other countries when these innocent individuals were brought to this country as minors by their parents looking for a better life? It’s blasphemous to countenance such a harrowing thought coming from Jesus.

What religious leader using the Bible as a basis for either moral or spiritual authority can say with a straight face that a person who participates in America’s economic life by operating a business can then discriminate against individuals based on their supposed “religious freedom”? It’s blasphemous to countenance such a harrowing, narrow minded thought that federal and “non” progressive state governments have placed their imprimatur.  Any proffered constitutional and statutory “right” to discriminate against others based on “religion”  generally elides over the fact that these blatant discriminators are utilizing society’s resources fully when they hire workers who attended public schools; when they welcome vendors that have delivered goods to them using society’s roads, bridges, and thoroughfares; when they use the
police or fire departments to respond to matters related to the safety or the protection of them or their property; when they use various court systems to adjudicate legal matters; when they use various governmental agencies to protect their patents, inventions, and trademarks; when they receive or send mail using the U.S. Postal Service; or when they use a host of various other societal resources to operate their businesses, among other things.

Nonetheless, more immediate in the above context, when Aiden or Brittany or Chasity comes home from school exhibiting or engaging in deplorable behavior that is deemed morally depraved, “conservatives” should look no further than the comforts of the four corners of their suburban homes. Perhaps she or he has heard dinner table conversations about how America was going to be made great again . . . no less so by an incompetent, incurious braggart.  Without hyperbole, one must accept comprehensively all the baggage that comes from making a conscious decision to vote for such a reprehensible man occupying the White House. A man whose “moral” underpinnings appear to be based on eugenics, and its myriad odious thoughts and ideas.  (Jesse Owens should have put to bed this easily discredited “scientific” theory eons ago.)

Moreover, perhaps Aiden or Brittany or Chasity heard rationalizing and bemoaning of what was presumably “lost” during President Obama’s successful eight years in office. This truly morally based man did actually make America great again after George “Dubya” Bush ripped it to pieces and made it a laughingstock, severely impacting the nation’s prestige and its treasury.  Thanks to the Electoral College and a tad bit over 77,000 voters in three Rust Belt states, Christian “conservatives” received what they’ve always wanted, advocated for in the pulpit, and deemed “Godly” proper over the centuries, a white male president. They helped elect an admitted serial sexual harasser who grabs women by the pussy — and one who immorally and bizarrely said his
daughter was a “nice piece of ass.” 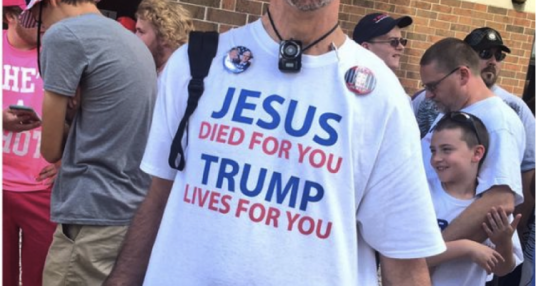 So when these same “Christian” conservatives stand in their pulpits on Sundays inveighing against various “morally” untenable societal ills that supposedly threaten our nation’s “moral” or “spiritual” underpinnings — bringing further damnation and wrath from God! — remember this: virtually all of them voted for an admitted pussy grabber, an adulterer, and a racist.

It’s not unreasonable to conclude that any purported quantifiable level of America’s presumed “moral” decline was certainly accelerated this past November when these same “Christian” conservatives voted for a pussy grabber. Perhaps they found support in Biblical scriptures, specifically some found in 3 JUDGES 6:9.